Vain About the Vein

Little Meems thinks she has a vein on her neck.

Backtrack.  Little Meems has a vein on her neck.  It is one we all have.  It transports blood to our heads.  It's kind of important that way.

She has discovered that this vein protrudes slightly on her neck.  Especially when she's screaming.  Don't ask me why she knows this.  Or how the investigation started.

She is just beside herself over this vein.  It was the first thing she mentioned to her father when he stepped through the door after his business trip.

And this vein is driving me insane.

I tried to explain to her that we all have those veins.  That some people's are more visible than other people's.  That she, being slender, is probably one of those people.  And that she will be like me, who takes after my father in that every vein on our bodies is visible.  At all times.  We have "poppy" veins.  And I have the vein in my neck that pops when I talk.  I hate it, but I need it, so what's a girl to do?  I have had the hands of an old woman since I was 11.  Big veins, popping out everywhere.  As I've gotten older, the veins have become more pronounced, and they twist and turn up my arms and in my neck.  My dad has them, his  mother had them.  It is a family thing.

Physically, she is a Norris (me) through and through.  So, duh.

Back to the vein.  I have been hearing about this vein consistently since its discovery 3 hours ago.  She will talk for me and I have to watch to see how it behaves.  See how it pops out??  SEEEEEE?????  Head wagging side to side like it's going to pop off.

I don't see anything, really.

"Well, it's there and are you blind?"  She is nearly hysterical and also, she's being disrespectful so I do some head wagging of my own, only I'm not as good at it as she is, but my voice is scarier.

Melodramatic exasperated sigh.  And another one.  So she stomps off to the mirror in the bathroom and practices talking in varying degrees of loudness and intensity -- mad, clenching her teeth, laughing, smiling.  I can hear her every facial expression.  She emerges, convinced more than ever that it's there and determined more than ever to convince me of the same.

She is irate that it is there.  She doesn't WANT it to be there (I can tell by the way she keeps throwing up her hands in disbelief and utter surrender, like "I give up!"), but when I tell her that I don't see anything, instead of relief, her face twists itself into agonized disbelief that I can't see this horrible awful thing, as she slaps her hands down in exasperation and waggles her head side to side some more.

I'm confused.  I don't know what answer she wants, but it's clearly the one I don't have.  But, I try, and so when I tell her that it adds personality, and makes her unique, she juts her bottom jaw out at me and stops breathing for a minute.  You know, that look you give your parents that says "you're an idiot?"  Well, she's got it mastered.  Honestly, I think girls emerge from their mother's womb having already mastered that look.

And then I see it.  And it's a doozy.  And I know in my heart that someone is going to be very scared of that thing one day.

And it makes me smile a little. 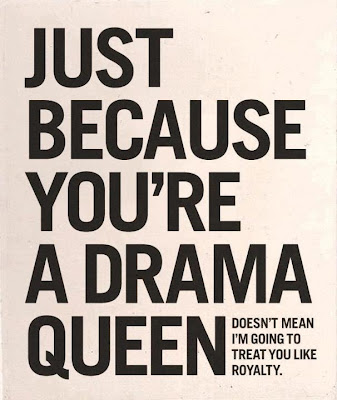