My children are growing up too fast.

The fact that they are so busy doesn’t help slow time.  Truthfully, though, they’re really not involved in that much (individually no, collectively yes).  We’ve made it a rule that they are allowed one sport activity and one music/art activity at a time.  So far, the only child with both on his plate is Will.  Little Meems isn’t interested in much, and Tate seems to be interested in the things his brother is interested in, because his brother is interested in them, however I feel  his talents probably lie elsewhere.  And he’s just getting started, because he’s finally old enough to participate.

I had a long conversation with another mom the other day about the craziness of our children’s lives.  And in it, we both had one of those “a-ha” moments that all parents have once in a while.  We were making ourselves crazy trying to make plans that would make us crazy because of how hectic it would make our already crazy lives because don’t the kids need something to do?  We realized we had gotten sucked into that vortex of feeling like you HAVE to have things scheduled for your child because that’s what everyone around here does.  For me, it was a reminder of my hard and fast rule to let my children be children.  To not over stimulate and over schedule them.  To let them play.  And just be kids.

My oldest son is experience driven.  He wants to try everything.  My youngest son wants to try things, but maybe not with quite the passion with which his brother pursues his activities.  My daughter – there’s plenty of time for my daughter to find something she loves.  If she has an interest in something – a genuine interest – we will find a way to make it happen.  But so often, I feel like I’m pushing her towards an interest, and that’s not fair.

However, we raise our children now to excel, in everything, and to be well-rounded (by our definition).  There’s some sort of cache in the fact that your child is active in art AND music AND multiple sports AND is in all the gifted programs at school to boot.  We hold our kids back to give them advantage over their peers, because we think they won’t rise to the occasion and perform at an age-appropriate level.  Granted, there are kids that NEED the extra time (my daughter included) but I have never believed in “red-shirting” simply because they might be the youngest child in the class.  In my book, guidelines are there for a reason.  And children, for the most part, tend to rise to the occasion and meet and/or exceed expectations.   I refuse to under-estimate my children.  Or maybe it’s a competitive agenda (see above).  Or perhaps we’re so afraid of their boredom…but why???  Honestly, my children become bored more easily when there’s too much going on, because they forget what to do with their downtime.  They become lost when they’re not being continuously stimulated.

Back to my a-ha moment.  Summer vacation is upon us.  My sons will do swim team.  And that is all.  Yes, it’s an everyday commitment, but it provides some structure to their day (which they really need), and they’re going to be at the pool anyway, so why not?  We can’t afford multiple camps – there are three children and one camp generally costs the same as an entire summer of swimming.  As for Little Meems?  I don’t know what she’ll do.  A veteran of swim team, she opted not to join this year.  It’s not her thing.  And that’s fine.  Why not a summer to just play and get lost in her imagination and have adventures?  She deserves to read and lay in bed and daydream and languish in not having to BE anywhere.  They all deserve that. 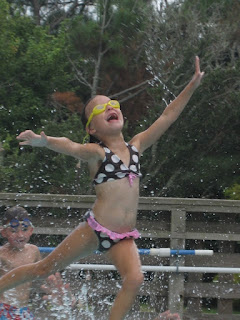 Because their childhood is passing too quickly.  Not just for me, but if we’re not careful, surely for them too.
Email Post
Labels: activities overscheduled kids red shirting summertime