It amazes me, how, as you watch your children grow you see more and more of yourself in them. 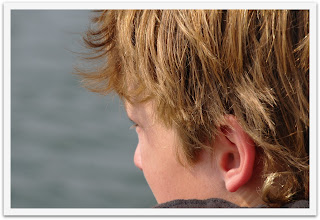 Lately, I’ve been noticing this about my son, W.  He’s 9 -- an age where he’s got a foot in two worlds and he’s not sure where he feels more comfortable.  I guess that’s what the whole tween thing is.
He’s athletic and physical like his father was as a boy, but I’m beginning to see more of the introspection and the shyness that defined me as a child.  He’s an observer of situations.  He assesses to get a feel for the dynamics before he feels comfortable in joining a group.
I did that.  He doesn’t seem to be self-conscious, necessarily (unlike me), he just seems to want to get a handle on things first.  Or maybe it's because he's a little shy.  He’s affectionate in his own way, but not the least bit demonstrative.  Which is a bummer to this mom who wants too many hugs and kisses.  BUT, again, he's like me.  I get it, and I have to respect it, but it doesn’t mean my arms don’t ache sometimes.  He’s quiet.  As a mom I worry that he has something on his mind, or something troubling him.  From experience I know he’s just doing some thinking.  And enjoys being alone with his thoughts. I remember my mother bringing me to tears on occasion trying to make sure I was OK (I was, I was just thinking).  At the time, I felt like I was being poked and prodded and talked to death, but now I understand.  It’s agony -- craving insight into your child.  But I'm reminded by my own experiences not to worry, that if he needs me he knows where to find me.  I just hope I can hold up my end of that bargain -- the worry part, that is.
Truth is, I like that he's like me.  I feel a connection to him because of it.  And that's better than any hug.
He's becoming such a nice kid.  A mature kid.  A handsome kid.
And I'm so grateful he's MY kid.
Email Post