This is Chickie Bunny. 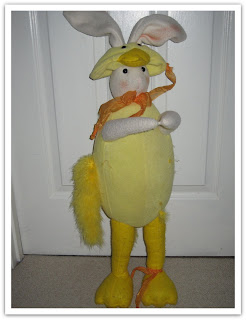 He belongs to Little Meems.  She saw him in TJ Maxx one day when she was 3.  She picked him up and carried him around and talked to him the entire time we were there.  So, of course, he came home with us.  Thanks DeeDee!

When we arrived home, he was supposed to be an Easter decoration.  But Meems had other ideas.  We decided he needed a name.  Ever the creative child, she came up with "Chickie Bunny." (This kind of originality is pretty standard around here.  Her dolls' names are typically either Mary or Catherine.  Or Dolly.)

Chickie Bunny has been a loyal playmate for 5 years.  He'll make an appearance, then disappear for a while, hidden somewhere in favor of American Girls.  Usually, he just lurks in her room beside the bookshelf.  I redid her room not long ago and moved Chickie Bunny to the playroom.  I considered, for the briefest of moments, getting rid of Chickie Bunny, feeling she'd probably outgrown him.  But I couldn't do it.  He's been a faithful friend, and of all her dolls, he is the go-to when she's playing "moms" and needs a toddler or a preschooler in her brood.

He's missing some feathers.  And his Easter basket.  He's got tufts of idontreallyknowwhat coming out of him.  There's an orange thing tied around his ankle.  He's lost his stiffness, and now mostly either leans against a wall, or hangs out, oddly enough, on both his feet and his face simultaneously.

He has been loved.  And he clearly still is. 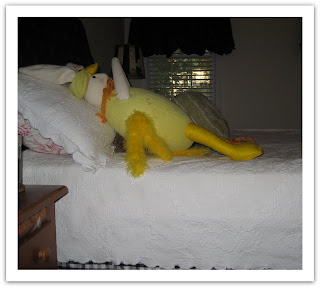 This is where I found him today.  In my bed.

And this is pretty standard for Chickie Bunny.  Every once in a while, I find him randomly placed in a chair, or on the stairs (in time out) or even in the shower.  Sometimes he's even wearing a tutu, or a shawl, or some bows clipped to his ears.  As he seems to randomly pop up in my life, I think it's only fitting, going forward, that he pops up at her big events in life...lurking in prom pictures, having a snack at her graduation party, as a wedding guest....

Chickie Bunny, you are blessed that a special little girl saved you from the clutches of a tacky over-decorator and instead gave you a life full of love.  Because love lives all year round, but Easter is only once a year.