The other day, I called upstairs to the playroom to see what Tate was doing.

Although I love the fact that my children are old enough to play on their own, sometimes the quiet makes me...nervous.  When this happens, I either start hollering names until someone answers me and then make them each report on what they are doin, or, I quietly find them and peek in on them.  I prefer to just stand in the doorway silently until they notice me with a startle.  Gotta leave them guessing, but knowing that you are always hovering around somewhere checking.  It might make me sound crazy, but the way I see it, the days of not being able to look away for just one second are not over – the things they can get into are just scarier.

Obviously, I do let them have the freedom to play independently.  I just like to monitor.  It is, unapologetically, who I am.

Back to Tate.  He was in the playroom.  I called up to see what he was up to.  Remember, this is the kid who quietly sliced his finger a couple weeks ago, then tried to doctor himself up, then tried to mop up the bloody bathroom.  All in a matter of 15 minutes or less.

“I’m trying to put underwear on this guy.”

Words you don’t really expect to hear.  This is a new one, even for him.

Upstairs, I see he has stripped Construction Man down to his birthday suit.  {Construction Man is like a “Ken” doll, but duded up in work clothes with a massive tool belt.  I believe he was given to my husband as a joke when he had some troubles with a construction project, and he made his way into our toybox, only to be unearthed many years later by Tate, who has a knack for finding completely random stuff.}  Tate has fashioned underpants out of blue tissues and is trying to staple it all together.  He looks up at my face, and based on my expression, immediately asks “what?”  I mean, what’s so weird about making underwear for your boy Barbie?  Dude needs some skivvies.  Construction Man apparently prefers going commando +  there is a girl in the house = Inappropriateness.

“Can you help me?”  I swear, that kid has the sweetest little voice and face.  And I am putty in his hands.

“Sure.”  And so I get to work. But it’s diifficult getting the bottom part of the stapler down the pants to get the stapler to work and still get a nice fit on the underwear.  So we noodle it around a bit, add some tape (Tate’s favorite binding tool) and, voila!  Construction Man is now Diaper Man.  But, I have to sadly explain to Tate CM’s pants are going to rip the tissue.

I go back downstairs to endless election coverage where the networks are prematurely calling elections in a bid to be the first, and changing out my purse.  Momentarily, he appears, and now Diaper Man also has a blue tissue cape stapled around his waist. 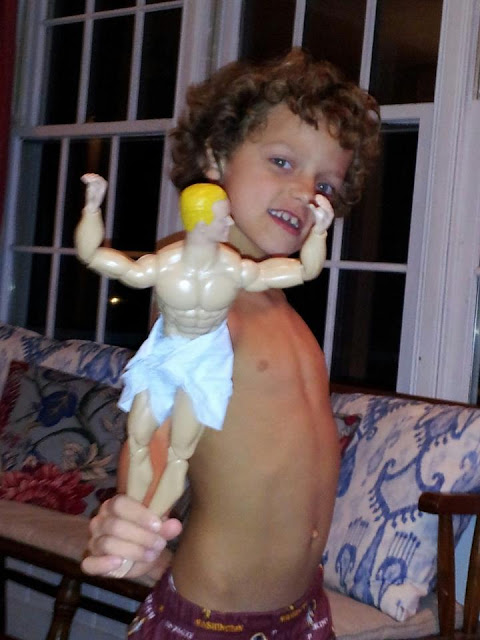 He is the first super human super hero Presidential Candidate.  He will help people.  He will not be mean.  He is smart.  He has big muscles to fight the bad guys.  He doesn't brag.  And he’s always honest.  He has perseverance, integrity, compassion, a commitment to quality, and will be a good collaborator.  {These last five are the character traits taught to my children by their school in an impressive character development program it has in place.}

And it occurs to me – isn’t it remarkable how children so innately understand what it takes to make a good leader?  It’s simple really:  be good, be true, be honest, be kind, be generous, be humble, be accountable, be brave.  If you have big muscles, even better.  When, in our journey into adulthood, do we lose that ideal?  Should we have to?

Diaper Man for President 2016?  Yes, he was created by a 6-year-old.  Yes, he wears only blue underpants.  But somehow, I feel certain we could use a candidate like him.