Yes, like everything else in my life, I’m way behind on this project.
Funny that’s the case, because I HATE being late.
I just sent out thank you notes from Christmas.  And in my frenzy to complete my children’s notes, I’m not sure I did my own.  I think I did, but really, who knows with me?
I also found some of Meems’ thank you notes from her birthday.  In  June.  Better late than never?
T turned 6 in January.  Yes, I realize that was almost two months ago.  With three kids, we do birthday parties every other year, and this was his  year to have one.  He decided he wanted a superhero party.  I was worried a little...was it too juvenile?  Would kids think it was weird?  And then I thought…he’s in Kindergarten!  He’s supposed to have little boy parties!  As the youngest of three, he comes to many activities and attitudes way earlier than his siblings.  Why not preserve the little boy he wants to be?
Superhero party it is!
Just as my oldest son goes 100% when he plays (sports, any kind of sports, always), little T does too, except his play is pretend play.  The kid is BIG on imagination and likes to go all in, dressing for whatever part he happens to be playing.  It’s not unusual to walk in the playroom and see him standing on his “stage” (folded-over gymnastics mats) with the Wii Sing microphone, a black pirate vest turned inside out so that you can’t see the pirate emblem, black pleather fingerless gloves with studs in the knuckles, black sunglasses that are actually spy glasses so you can see the person behind you, and a bandana wrapped around his head, do-rag style.  Or, sporting cowboy boots, jeans, the same pirate vest and bandana, a cowboy hat and a holster he made out of his church belt, some scotch tape and koozies, filled with water guns (outlaw).  Or pirate vest (it gets a workout), yard gloves, cargo pants, sunglasses and a plaid shirt (garbage man).
I knew that I would have to do it up with all the props that superheroes need.  He wanted a mask and wrist cuffs to wear to the party, along with his “super T” shirt I made him when he was 4.  And a cape, if possible.  And then I thought…aha, party favors!  So I stayed up half the night (because even though I try not to be, I’m also a procrastinator), made 10 masks and 20 wrist bands for all his superhero friends.  And I threw some silly straws in there for fun, because honestly what kid doesn’t like silly straws.  I was a little chagrined when one of the little boys looked in the goody bag and declared it “lame.”  But as you can see, he got over that pretty quickly.
What’s better than having 10 little superheroes running and screaming through your house? 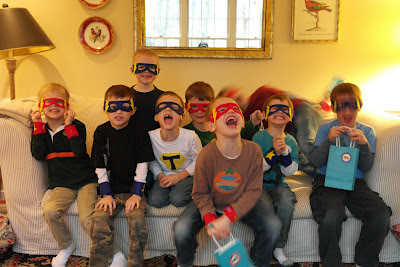 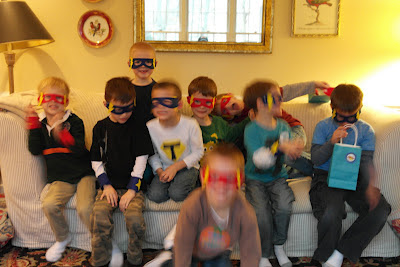 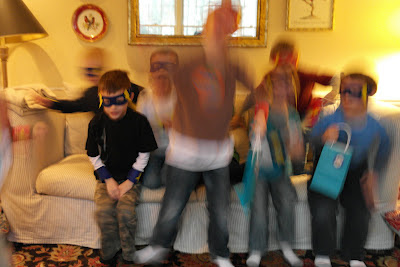 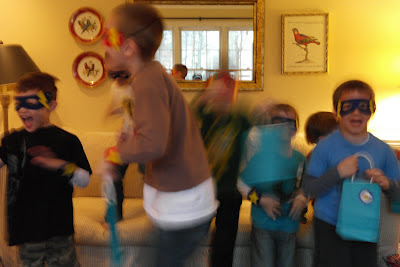 Absolutely nothing.
Especially when it’s followed by giant hugs and a “best day EVER Mom."