My son W is one of those kids who never stops.  Even as a little guy he would go at full speed until he collapsed.

He's always been in search of what's next.  An adrenaline junkie, adventurer, risk taker, try everything, run before you can walk kind of kid.

If he could go to college and major in play, he would.

The kid who will run a 5K, play in a lacrosse tournament, play basketball with his friends and ride bikes for hours, then follow up with a baseball game and declare it "best day ever!"  He has a lot of "best days ever!"  At 14, I don't know, nor have I ever known anyone who can live life more in one day than he can.

Friday, he had an early morning cross country practice.  After running 7 miles, he came home, went to his last gym workout, mowed the neighbor's yard, mowed our yard, took care of the neighbor's dog, went to his friend's house, then rode his bike to the river for the afternoon.  After coming home, took the dog for a walk on the skateboard, threw some lacrosse balls, ate dinner and then played the XBox with a few friends before being forced to read and go to bed.

This is a typical day for this child.

It's exhausting.  For me.  Not for him.  I like to say he squeezes the juice out of every single day.  All the juice.

He doesn't do anything small -- everything he does is full tilt.  And he's not afraid of much, which is both a blessing and a curse.  How many times as a little boy did I hear other moms ask "you're letting him do that?"  Truthfully, for some reason I just knew he could.  Or he would at least try.  As long as it was within reason and he wasn't hurting himself or anyone else, it would be considered.  That's not to say he hasn't hurt himself on occasion along the way.  This is the kid who broke his thumb playing trampoline soccer, and who created the game "big wheel slingshot" and plays basketball on skates.  At 6 months, he figured out he could roll across the room to get where he wanted to go.  He would roll all over the place, and he was fast, and once he reached his destination he always gave me the biggest smile and would kick a little.  He was the Mario Andretti of crawling, and had barely mastered walking before he looked at me, pointed his finger and said "wun."  When I left him alone for 2 minutes at 13 months to retrieve laundry and discovered he had climbed up on the dining room table and was trying to swing from the chandelier, I just knew.  This kid could be the death of me.

Or, he could teach me a few things.  And he has.

Say what you will, he lives life.  I mean, really lives.  And always has.  And he has taught me to let him (within reason).

And isn't that the point?  None of us know how much time we have.  Isn't it a shame NOT to squeeze the juice - every beautiful, delicious ounce of it - out of every single day? 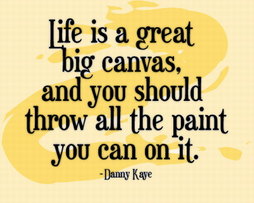