The other day, Tate and Meems were fighting.  As much as I would like to NOT be writing that, it's not reality around here.  On that particular day, the fighting reached an extraordinary crescendo that resulted in the destruction of a new toy catalog and a giant Sharpie slash on the sofa cushion.

After their dad's head split open being sent to their rooms, they were given their consequences -- early bedtimes.  Womp.  Oh, and also, because they had been having so much trouble getting along, they each were charged with writing 10 good qualities about each other.  Womp womp.

A little later, each emerged from their rooms with their lists. 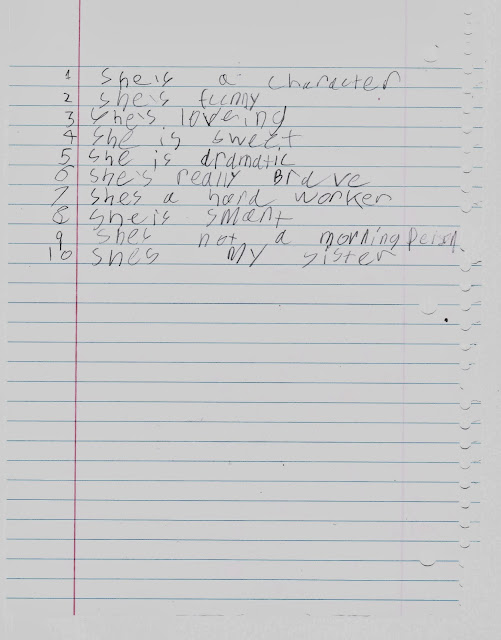 I thought he made some very wise observations about his sister, and said some lovely things.  Although, the "not a morning person" comment, while true, isn't necessarily what I had in mind.  At the same time, it wasn't offensive and she enjoyed that comment, so we left it at that.

Meems' (please ignore the spelling - my girl is a terrible speller): 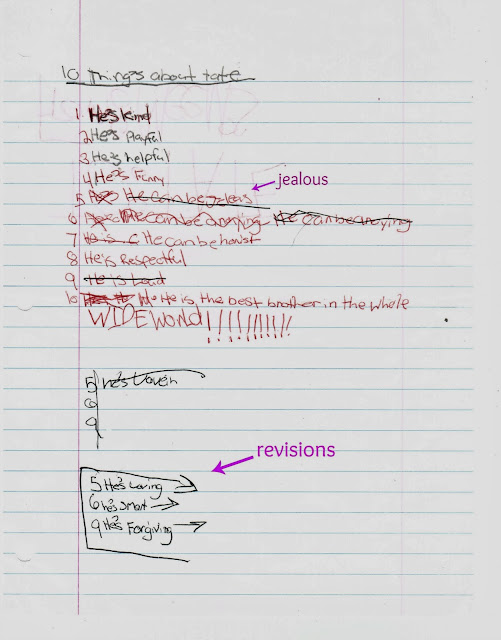 Ahem.  It seems someone likes to have the last word.

After discussing how "he can be jealous" and "he can be annoying" are not positive characteristics, it was decided that some revisions were in order.  Lucky for her, #9 is true.  If he'd written those things about her, she would have come unglued.

The hope was to focus on the good that they saw in each other as we move forward.  Of course, they are 10 and 7.  We'll keep our fingers crossed and think optimistic thoughts.

A new toy catalog came in the mail today.  Now, if only someone would send me a new sofa cushion...